An outbreak of avian influenza is every poultry farmer's worst nightmare. Since november of last year, the virus has been found in a number of European countries - including France, the Netherlands, Belgium, Switzerland, Finland and Germany. But the avian flu virus has also recently emerged in Asia. So it's no surprise that many of our customers ask us for the best practices in "boots hygiene". The following tips help you to prevent an outbreak of avian flu in your farm.

One of the most essential practices is to switch boots (and work clothing in general) when entering the stables. Try to avoid entering the stables with your outdoor boots. When leaving the stables, it's best to walk on the paved paths and certainly do not cross grasslands or canals. Avian influenza is most often spread by contact between infected and healthy birds, though also indirectly through contaminated equipment like boots.

DISINFECT AND CLEAN
YOUR BOOTS

It is recommended to disinfect and clean your boots in a boot washer before entering the stables. Even when you are wearing a different pair of boots for inside and outside the stables. Don't see this as an unneccesary routine, it might actually spare you from a lot of problems one day.

CHOOSE BOOTS WITH
A FLAT SOLE

Steplite EasyClean is such a boot with a flat sole. These popular work boots are made of polyurethane, which makes them very lightweight, flexible and durable. It's proven that polyurethane boots last three times longer than pvc or rubber boots. 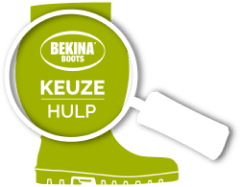 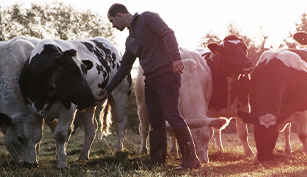 Dominique has been wearing our farming work wellies for 10 years! Read his review here 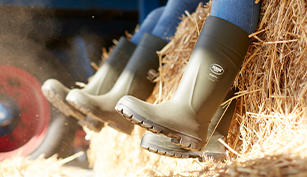 Checklist: How to choose the best farming wellies

Are you a farmer and looking for a new pair of wellies? But you don’t know which ones to choose...
Read more 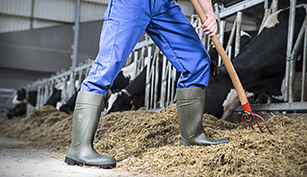 Receive the latest news from Bekina Boots in your mailbox.

Visit us at one of the following trade fairs.

View all our events